POLL: Who will win the presidential election?

The Water Cooler
Al_Wallace November 3, 2020, 3:16pm #1
Who will win the next presidential election?

and how will this affect the US stock markets?

Today is election day. The mail in votes won’t be counted until after the polls close so we won’t know the results for at least a few days.

Yeah good spot @KarenM, market wants clarity no matter the results are, kinda impatient like me on that :))

From the investors point of view i guess (from what i am reading) if Biden ends up winning, people think that this could open the door to a big support package for the economy, particularly if the Democrats also take control of the Senate, so it is expected a rally in stocks prices in the case this happens.

On the other hand the other two possible scenarios are if Trump were to win and the Senate stays under Republican control, it would likely lead to less stimulus than under a Democratic sweep and, as a third possibility, a Biden win and Republican Senate would be least beneficial to stocks, because it would mean the lowest chance for stimulus.

Personally i think that no matter if the clear winner this November 3rd is Mr. Trump or former Vice President Mr. Biden i guess this is secondary, because history shows that no matter which party controls the White House…long-term stock returns. Eventually we will see a rise in price

I think it might be even longer than that Karen, due to absentee voting and postal voting - I think i am right in saying, at least in some states, as long as you have you vote date postal stamped on the day of the vote or before, your vote will still be counted?

Anyways, I hope it goes whichever way you would like it to go @KarenM

For what I’m reading, Trump is currently leading, 16 votes to 10 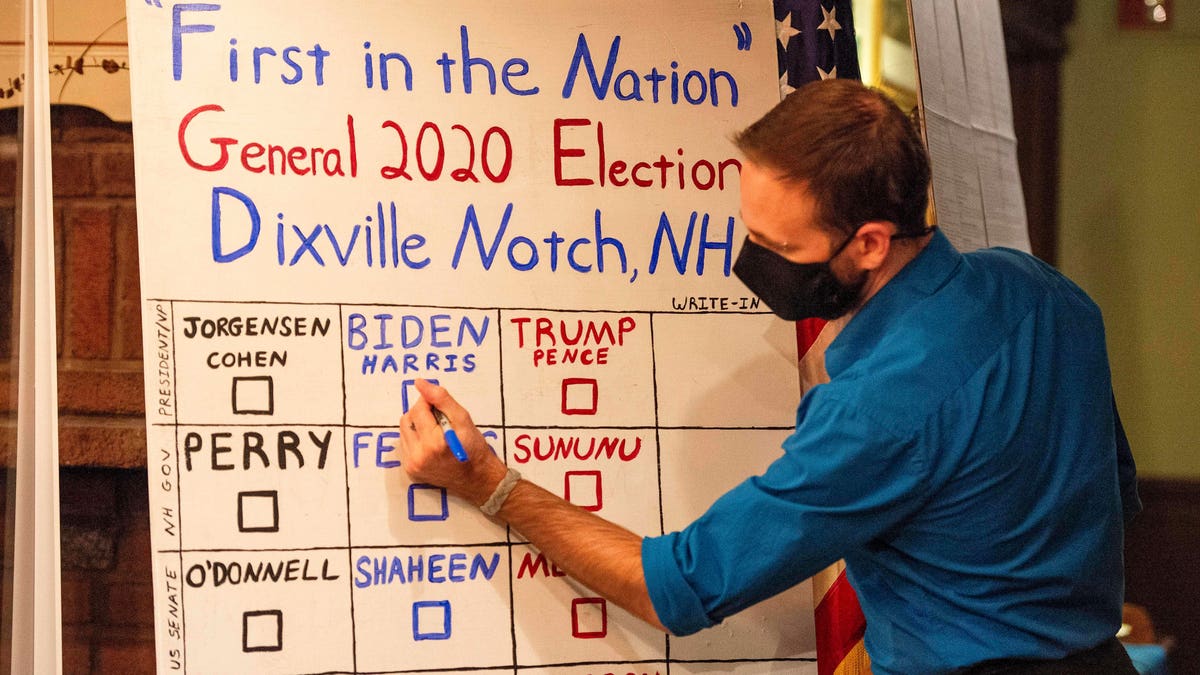 Both towns cast their votes at the stroke of midnight.

Hi guys, my main hypothesis is that if Biden wins but does not win over, Trump will not recognize him, claiming fraud, the States will not have a president for weeks or months, and this will determine the top of gold and the sinking of the American indices, before a new flourishing season of shareholding.

The alternative is for Trump to win but not overwhelm, and if that happens (given the polling fallacy already experienced in 2016), what direction could the markets take? Would they see his election as a certainty, finding momentum, or in any case, given the pre-election trend and the covid situation, would they consider him unsuitable, finding new lows?

Purely watching on the technicals, Nasdaq chart is bullish IMHO.

Yes @Al_Wallace you are right. It does vary by state. So the results will be more than the few days I mentioned.

love ‘The Onion’ for a bit of levity during serious times

This is going to be a very volatile week, whatever happens, even under the “good” scenario of Biden winning clearly, equity markets will adjust because of the expected increase in corporate taxes next year.
More likely, markets will go crazy in the short term because there is no clear winner and the outcome takes some weeks to be sorted out, maybe even with the intervention of the Supreme Court. Here I coincide with Stefano @Tradelta, precious metals & cryptos benefit, equity markets fall and USD devaluates.
I sincerely hope you guys make the right decision Karen @KarenM

I did my part @mosigman! Time will tell.

Seems like Trump is going to win with less votes again.

Why do you guys think the world seems so interested in the US election? It’s rare people pay much attention to elections in other countries, Its always a global talking point, yet often elections closer to home get less coverage. Here in the UK, the US election gets almost as much coverage as our own elections.

In Croatia it’s also covered very much, almost like we are also going to vote haha
For days it’s the first thing they mention on the news.

Very interesting @Al_Wallace. I had no idea other countries were so interested in our election. We don’t really hear much about leaders from other countries. My guess would be that the stock market plays a big part in that.

Here in the UK, the US election gets almost as much coverage as our own elections.

Here in Italy the same as you. They are very followed with interest.

I think this attention is rationale Al. The US is still the largest economy and their policies and cooperation or otherwise with other countries are very important for those other countries. You mention the UK: a Biden vs Trump win changes everything in terms of the terms of a post-brexit trade deal. Most large companies in all developed markets have US economy exposure so are directly affected. Global sectors for example like energy and renewable energy are very dependent on the US approach.

I think the likely ongoing uncertainty is not only now very likely but probably not great for markets.

Sanders predicted a plausible worst case scenario if there wasn’t a clean sweep by the Blues :

“ It could well be that at 10 o’clock on election night, Trump is winning in Michigan, he’s winning in Pennsylvania, he’s winning in Wisconsin, and he gets on the television and he says, ‘Thank you, Americans, for re-electing me. It’s all over. Have a good day.’ But then, the next day, and the day following, all of those mail-in ballots start getting counted, and it turns out that Biden has won those states, at which point Trump says, ‘See? I told you the whole thing was fraudulent. I told you those mail-in ballots were crooked. And we’re not going to leave office.’ So that is a worry that I and a lot of people have.”

I agree with @pb1 statement regarding the USA is still the largest economy and their policies(internal and external) affect not only the stock market but lifes of millions of people around the whole world. Countries like Cuba, just to put an example, follow closely the whole USA election process.

Trump has said that he will toughen economic policies against Cuba while Biden has said the opposite…hence the importance for cubans that Biden wins. People here follow always very closely almost all the election processes in Latin America and Russia because they are the most important allies cubans have.

funny or scary…it’s hard to tell these days.

The president made a string of claims but provided little evidence.

6 Likes
next page →
Disclaimer: any information found on the Community platform does not constitute any form of advice or recommendation by Crowdsense Ltd. and is not intended to be relied upon by users in making (or refraining from making) any investment decisions. Appropriate independent advice should be obtained before making any such decision.
Copyright © 2020 Crowdsense Ltd.. All rights reserved.